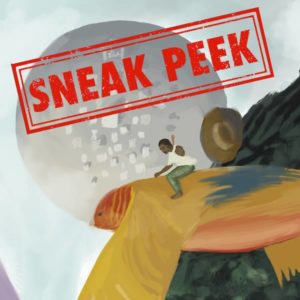 Here at Worldbuilding Magazine, they keep us writers chained to small, uncomfortable desks. Although isolated from the outside world, I can feel the excitement in the air.  The October issue on Cartography & Navigation is almost ready to release.  The articles are done and in the hands of our talented layout artists.

I’ve signed an ironclad NDA and am risking my life to even talk to you about this stuff.  But since you begged, I’ll give you a quick preview.  Just don’t tell anyone.

I don’t know what everyone else is working on, but I can tell you about my article, “Mapping Aurora”.  It’s a tour through my quest to create a useful map for a plane of air.  One editor (whose name rhymes with “potato”) spoke with a promise of anonymity.  He or she said, “going through your process was interesting and valuable from a design perspective. Honestly, mapping out weird cosmology is something I’ve always approached like a traditional map, and been ultimately dissatisfied with the results. Yet I would have never even considered alternative ways of displaying information. So from your trial and error I hope that I (and our readers!) will endure far less frustration next time we attempt something like that.”

Oh no, they’re coming for me!  In case I’m never again allowed near the blog, keep an eye out for the next issue, due out in October.   Also, tell my family I love them and regret noth….

Want to make sure you don’t miss an issue?  Subscribe for free.